Destiny
The Taken King
Destiny 2
Warmind
Forsaken
Season of the Chosen
Season of the Risen
A veteran Titan who coordinates the defense of the City, Zavala helps to mentor and outfit other Titans.
― In-game description[2]

Commander Zavala is the current Titan Vanguard of the Tower.[2] He is a leader with a will of iron and works tirelessly to keep the people of the City safe.

Zavala helped in the construction of the wall surrounding the city and the city itself.

Zavala was a member of the Consensus at the meeting before the Great Disaster. After Shaxx demanded the guardians trained to combat the Hive's swords, Zavala replied that was up to the Consensus to decide.[4]

Zavala was the Titan Vanguard at the time of the destruction of the Black Heart by the Guardian. As Vanguard Commander, Zavala is responsible for many of the campaigns and operations conducted by Guardians throughout Destiny and Destiny 2.

Zavala is seen a clear headed leader, someone who doesn't think without a second thought, he often finds himself putting the other vanguards in the tower in place, so you could say he is a responsible role-model. During the Red War campaign, Zavala was forced to escape to Titan with whatever civilians he could, there he showed his dedication to the people of the Last City as he constantly puts their protection above all else.

Zavala sells a variety of Titan armor (including Vanguard armor) and emblems. All Guardians can purchase and own these items regardless of their class, but only Titans can equip the Titan armor.

Commander Zavala in the ending of The Coming War. 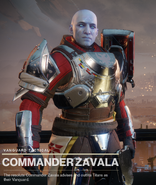 Zavala at the Tower in Destiny 2. 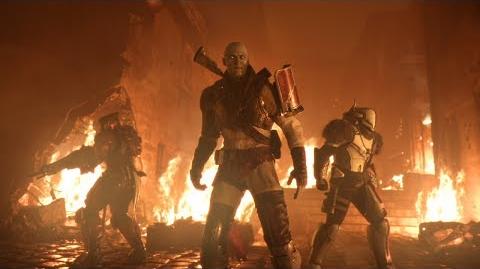