3828867689
Those who have stared into the Void are not bound by the laws of space and time.
― In-game description

Voidwalker is a Warlock subclass in Destiny.[1][2] It focuses on the manipulation and use of Void energy to obliterate enemies. It has been described by Bungie as a "glass cannon," offering a strong offense but taking away from defense.[citation needed]

The Voidwalker's super ability is Nova Bomb, a ranged attack that lets the player "hurl an explosive bolt of Void Light at the enemy, disintegrating those caught within its blast."[3] 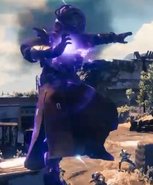 A Warlock fires a Nova Bomb.

日本語 Português do Brasil
Community content is available under CC-BY-SA unless otherwise noted.