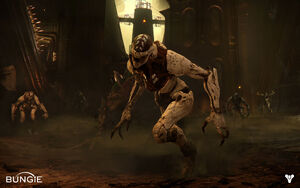 Thralls are a class of the Hive species.[1] Thralls are a mixture of brown and white in color and prefer melee attacks using sharp claws.[2][3] Thralls' melee attacks do arc damage.[3] They wear basic armor that appears to be encrusted into their bodies. They have no visible eyes and, in some places, their skin has rotted away to expose their skeletons.[2]

Thrall, for the most part, lack subtlety. You can exploit this in several ways. For example, simply using your movement abilities to float over their heads render their melee-based attacks ineffective. As well, ranged firepower is the best approach, as they lack any ranged attacks, thus enabling you to pick them off easily until either they're completely dispatched, or some make it to you in close quarters.[1]

when at a position of elevation thrall will hide from you until you come down at which point they will swarm again.

Avoid exposing yourself to other, more powerful unit-types of Hive, as Hive units are generally diverse and have many tactics, including using Thralls as a diversionary force and/or cannon fodder.[1]

Grenades are quite effective when encountering large packs of Thralls and allow time to dispatch other hive units.[1]

For all Hive units, the head is a primary weak point.[1]

Retrieved from "https://destiny.fandom.com/wiki/Thrall?oldid=216684"
Community content is available under CC-BY-SA unless otherwise noted.