Start a Wiki
watch 01:28
Official 'Destiny: The Taken King' - Launch Gameplay Trailer
Do you like this video?

For the quest, see The Taken King (Quest).

The Taken King is a downloadable content (DLC) expansion pack for Destiny. It was released on September 15, 2015.[1] The Dark Below and House of Wolves are required to play.[2]

The digital download edition of The Taken King was released for $39.99 and was intended for players who already own Destiny, The Dark Below, and House of Wolves.[3] It included:[3]

This edition was later reduced to $19.99 and updated to include The Dark Below and House of Wolves.[4][5]

The Legendary Edition can be purchased for $59.99 and includes:[3]

The Collector's Edition can be purchased for $79.99 and includes:[3]

The Digital Collector's Edition can be purchased for $79.99 and includes:[3]

Prior to the events of The Taken King, Guardians crippled the Hive invasion force on Earth and the Moon by methodically taking down their field commanders and strategists, including Sardon and Omnigul. The Guardians then banished Crota's soul and eventually killed Crota himself. They also destroyed a Shrine communing with Oryx and killed its protector, Sardok.

Eris Morn alerted Mara Sov of Oryx's arrival, and the Queen set out with the Awoken Armada to Saturn, where the Taken King's Dreadnaught had stopped to refuel. Uldren Sov led his fighter wings to attack the Dreadnaught and engage the fleet of Tombships protecting it, with the Queen and Oryx presiding over the battle from their respective flagships.

With help from her Coven of Techeun Witches, the Queen summoned her Harbingers, deadly orbs that could decimate an army in seconds. The Harbingers bombarded the Dreadnaught, but after the explosions faded away there seemed to be no lasting marks on the battlecruiser. Oryx then fired the ship's superweapon, which ripped a hole through the rings of Saturn and completely destroyed the Awoken fleet. Queen Mara and many other major parts of the Reef's leadership, including Paladin Abra Zire and Techeun Shuro Chi, have since disappeared and are considered MIA, while Petra Venj has advised a remaining Paladin to declare all of them dead.

Meanwhile, the Vanguard intercepted a distress signal on all channels, broadcasted from the Skyburners fortress Fleetbase Korus on Phobos. A Guardian is dispatched to Phobos, and they witness a strange new enemy slaughtering the Skyburners. Oryx contacts the Guardians, willing into existence an army of corrupted Cabal and Hive called the Taken. The Guardian defeats these Taken, overcoming Syrok, Word of Oryx. They then attempt to escape the Skyburner Keep via the Aerodrome landing pad, which is riddled with Taken. The Guardian reaches the landing pad and escapes Phobos in their ship.

From then, Oryx's master plan is revealed: He will enslave as many Cabal, Vex, Fallen, and his own Hive as he can, and use them to bring the system into ruin. Initially, one of his consorts, Ecthar (who also fluently speaks English), tells him to only retrieve the strongest of the four races and bring the rest to nigh-extinction, but Oryx objects to Ecthar's advice.

The Vanguard has discovered Oryx's Dreadnaught in orbit of Saturn, and has analyzed its super weapon. Hunter Vanguard Cayde-6 directs the Guardian to one of the dead Colony Ships in Old Russia, where he had previously hidden a stealth drive that could get Guardians past the super weapon into the Dreadnaught to face Oryx. Upon touching down in the Blast, just outside of the Fallen House of Devils' lair in the shadow of Exodus Red, the  Guardian discovers that the Taken have attacked Earth and are fighting the Fallen. The Guardian enters the Exodus Blue and accesses a service elevator to reach a platform. The Guardian then extends a bridge to the other spire of the Exodus Red. After crossing the bridge, the Guardian fights past Fallen and Taken to the top, where they recover the stealth drive. However, a force of Taken warps in, led by an Echo of Oryx. The Guardian defeats the Echo and returns to the Tower. 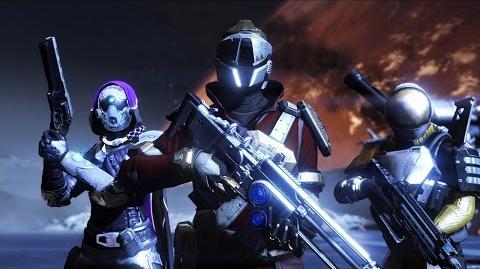 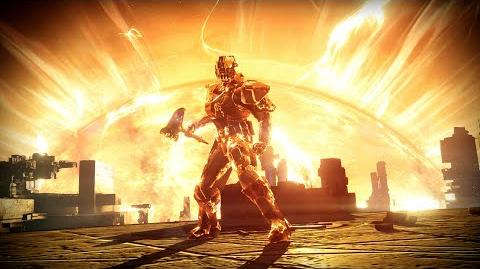 Light logo
Add a photo to this gallery

Retrieved from "https://destiny.fandom.com/wiki/The_Taken_King_(Expansion)?oldid=222732"
Community content is available under CC-BY-SA unless otherwise noted.