Destiny Wiki
Register
Don't have an account?
Sign In
Advertisement
in: Articles needing expansion, The Dark Below
English

Edit
watch 02:23
Official 'Destiny' Expansion I: The Dark Below Trailer
Do you like this video?
Play Sound

Beneath the surface of the Moon, a long-forgotten enemy wakes. Survive the Hellmouth, and stop a dark army from invading Earth.
― Official description[1]

The Dark Below is included in certain editions of The Taken King and can no longer be purchased separately.

After the destruction of the Black Garden's heart, Eris Morn lands in the Tower. As a former Guardian, Eris warns the Tower of the return of Crota, a Hive prince that is worshiped as a god. Eris is the only survivor of a failed raid to kill him. She requests the Guardian to purge some the Hive on Earth by killing the Fist of Crota. Although killing the Fist of Crota did stop some Hive, the remaining Hive attempt to take over Rasputin. The siege is led by Omnigul the Will of Crota and the Might of Crota. After killing the Might of Crota, the Guardian hunts down Omnigul. Eris then sees the Guardian as ready to stop the Hive on the Moon from resurrecting Crota. The Guardian seeks out the Soul of Crota and destroys it along with the Hive Wizards trying to resurrect it.

In addition to new weapons, The Dark Below contains armor that can boost a Guardian's Light level to 32.[1] Eris Morn appears in the Tower and provides access to exclusive bounties, emblems, and materials.[1] 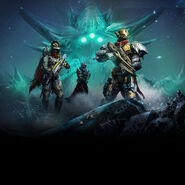