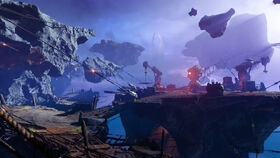 The Tangled Shore is an asteroid wasteland that lays within The Reef that was introduced as the primary destination in Destiny 2 Forsaken. It is a lawless region that exists outside of the jurisdiction of The Reef where rogue Fallen take refuge. The Scorn, along with groups of Cabal and Hive have overrun the region. The leadership of the region is deligated to The Spider and his outsider Fallen faction.

The region's geography consists of a group of asteroids connected by long cables and hooks. Bridges were constructed to connect various explorable areas within the region. Remnants of the Red Legion have taken residence at Sorik's Cut, while an offshoot of Savathûn's Hive have crashed onto the shore near the Jetsam of Saturn. The House of Dusk and the Scorn are engaged in conflict across the region.

Embedded within the asteroids are caves, secret supply bases for The Spider's fallen clan, Lost Sectors, and shortcuts. The area is home to all of the Baron Hunts in Forsaken, where Guardians embark on adventures to kill off the leadership of the Scorn.

On the outskirts of the Tangled Shore lies the mysterious Dreaming City, marked by a single large Awoken watchtower. 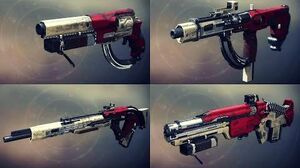