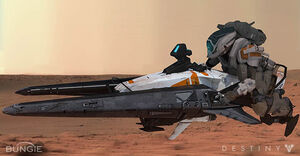 A Sparrow is a land-based vehicle used for rapid local transportation. They are used by Guardians to get from place to place quickly within a map or area. Each Guardian has at least one unique, personalized Sparrow stored in their jumpship, which can be summoned at will.

Sparrows consist of a drive engine, antigrav system, steering system, and seat. Steering is managed via the pedals, whilst the hand grips control thrust and braking mechanisms. A comms system and sensor suite is located right in front of the driver's seat.

While the Sparrow is fast and relatively hard to hit, it is also rather fragile, can easily be destroyed by enemy fire, and gives next to no cover to its rider. Sparrows can, however, run down smaller enemies. It is prone to rolling over if used carelessly.

After taking enough damage, a Sparrow will fire its engines and launch itself as a projectile, exploding on impact and inflicting damage to anything nearby.

In Destiny, a new character will obtain their first Sparrow during the mission The Warmind. Other Sparrows can be obtained through various activities and vendors, such as Amanda Holliday. Some sparrows were also given through promotional offers.

The durability and speed of the Sparrow directly corresponds to its rarity:

This is the basic Sparrow S-10 that every Guardian acquires during The Warmind.

These are the 20-class Sparrows, with the exception of the Sparrow S-10V. Each class will have different Sparrows in this tier. However, any class can ride any sparrow.

These are the 30-class Sparrows.

These are special legendary Sparrows that have enhanced durability and speed, with the exception of the EV-30, 31, 32, and 33, which have only Tier 3 speed and durability.

These are the sparrows that can be found in the Vault of Glass and Crota's End raids. Both sparrows have Tier 3 speed, however boost and durability are significantly higher than all other sparrows in Destiny.

New characters can obtain their first Sparrow from Amanda Holliday in the Tower after reaching level 20 and completing the Red War quest. Sparrows can also be obtained from Eververse engrams.

Some Sparrows come with extra perks such as ones that automatically reload the Guardian's weapons while riding.

Concept art.
Add a photo to this gallery

Retrieved from "https://destiny.fandom.com/wiki/Sparrow?oldid=222633"
Community content is available under CC-BY-SA unless otherwise noted.