Black Garden, Moon
The Sol Divisive is a Vex programming. They are the faithful protectors and worshipers of the Black Heart residing in the Black Garden.[1] Some of the Vex belonging to the Sol Divisive have the title "Disciple" attached to their names.

It is believed that the Sol Divisive is a key part of Vex operations in the Solar System, though there is little insight into their behaviour. It is known that this collective tends to act religiously, something confusing to most scholars, this shows that the Vex have potentially found something that can transcend even their own power within the Black Garden. 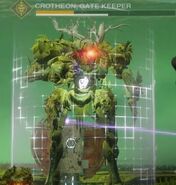 Retrieved from "https://destiny.fandom.com/wiki/Sol_Divisive?oldid=224627"
Community content is available under CC-BY-SA unless otherwise noted.