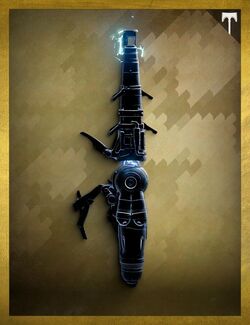 The Shock Cannon is a Fallen weapon that is wielded by certain Splicer Captains and can also be picked up and used by Guardians. It is dropped from Shock Captains during certain missions. It fires arc energy projectiles with each pull of the trigger, and is strong enough to smash a Sparrow with a single shot.[1] Each cannon holds 10 shots.

Damage from the explosion does not affect the Guardian using the weapon.

Retrieved from "https://destiny.fandom.com/wiki/Shock_Cannon?oldid=157396"
Community content is available under CC-BY-SA unless otherwise noted.