Edit
watch 04:03
Wiki Targeted (Games)
Do you like this video?
Play Sound

The Scorn are an undead Fallen faction of terrorists led by Uldren Sov and a group of Barons under the command of Fikrul, the Fanatic, and are the main antagonists in the story of Destiny 2: Forsaken. During the events of Forsaken, the group orchestrates a jailbreak in the Prison of Elders, located within The Reef. They are responsible for the death of Cayde-6 who, along with the Guardian were dispatched to quell the uprising.

Scorn are created by exposing a Fallen's body to Dark Ether, which corrupts them. Due to most of them being directly raised from Fallen corpses, or otherwise dying and being resurrected so many times after turning, Scorn appear much different and more grotesque than the House of Dusk Fallen seen throughout Destiny 2.

This article is a stub. You can help Destiny Wiki by expanding it.
The Scorn are considered former members of the House of Exile that were forcibly removed before the events of the Red War. The house of exile was a house of fallen that lived on the moon and had very unorganised hirearchy. The scorn were started off from the 8 barons that started off as dregs and were cast out from the house of exile, together they used teamwork to gain territory and conduct raids for more ether. 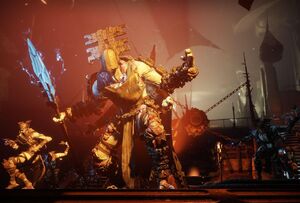 The Scorn appear similar to Fallen, but trade their overall "space pirate" theme for more of a "wastelander" one. Rather than lightweight cloth or hide armor with the occasional bit of high-tech armor, the Scorn wear nothing but loincloths, straps, chains, and bits of scrap metal that are either rusted through or painted yellow; some of their armor appears to be directly bolted to their body using metal spikes or rivets. Their armor is often decorated with crude spike or razorblade-like shapes, with higher-ranking Scorn having headdresses or other apparel that resembles their insignia. Unlike the Fallen, the Scorn do not have to wear a life support system that supplies them with Ether.

As Scorn are almost entirely made up of reanimated Fallen carcasses, their bodies are often rotten or destroyed in places, their skin cracked to reveal disgusting blue-glowing boils filled with the corrupting "Dark Ether" that gives them life; extreme cases of these mutations can be seen in Ravagers, which are completely missing their heads, yet still alive, or Abominations, who resemble Hive Ogres more than any kind of known Fallen type.

Instead of limiting themselves to the typical Fallen arsenal, the Scorn instead wield variants of them that bear various modifications, usually appear more rugged and more dangerous, but less precise, with a more fire-orientated theme. Weapons the Scorn have instead designed completely by themselves are as unflattering and mundane as almost all of their technology, appearing centuries behind the cutting-edge technology that saturates most of Destiny's setting, yet being able to contend with it nonetheless. Wraiths wield nothing but a pair of Solar torches they use as maces, Lurkers also wield small torches that somehow function like pistols in addition to simple metal shields, close-range Raiders utilize automatic weapons that launched sawblades soaked in Void energy - with long-ranged "sniper" ones instead wielding Linear Fusion Rifle-like weapons that are explicitly called "crossbows" - and perhaps most prominently, their Archon, Fikrul, wields an enormous staff tipped with a blue gem that can fire Arc energy.

The Scorn are not an established House of Fallen but are considered as such due to their Baron-style leadership. Their leader is the Prince of the Reef Uldren Sov, the brother of the Awoken Queen Mara Sov. The Scorn are organized under seven powerful Barons, with a single Archon overseeing their activities. 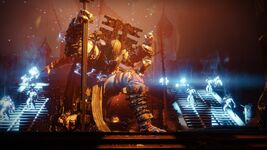 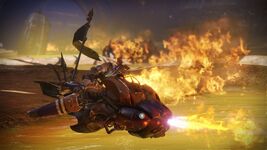 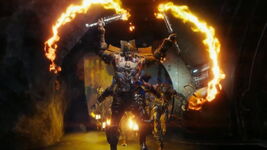 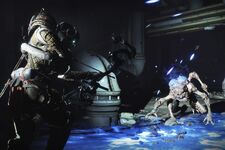 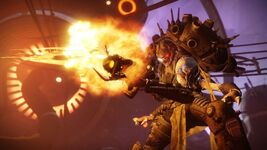 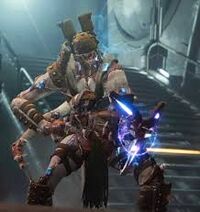