Edit
watch 02:53
GTA: The Criminal Enterprises - The Loop
Do you like this video?
Play Sound

Destiny
Destiny 2
Season of the Chosen
Season of the Risen
The last of the Iron Lords, Lord Saladin has kept an eternal watch for the return of SIVA.
― In-game description

Saladin Forge[2] is one of the two remaining Iron Lords, one of the first unified groups of Guardians. In Destiny, he can be found at the Iron Temple, atop Felwinter's Peak. He manages the containment of the SIVA outbreak, giving out quests to Guardians.

Lord Saladin is a legendary hero and defender of The City with a long and respectable career. His most famous moment came during the infamous Battle of Twilight Gap when he led the City's forces to a hard-won victory over the combined forces of the Fallen Houses.[2] 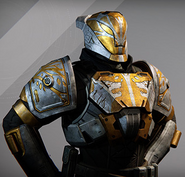 Lord Saladin in his armor.