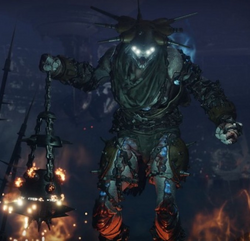 Reksis Vahn, the Hangman was a Scorn Baron that appears in Forsaken. He was a depraved executioner who had a strong hatred for Servitors and their place in Fallen culture. He utilized a Flame Cauldron in combat similar to other Ravagers of the Scorn. He was imprisoned in the Prison of Elders alongside the other Scorn Barons before being set free by Uldren Sov.

Prior to the events of the Red War, Reksis was responsible for exterminating the last Servitors of the House of Wolves, which led to the ultimate destruction of their house. He is the tallest of the Barons, comparable to a Hive Ogre. He siphons Ether from Servitors and channels it to the other Barons, and as such, has been given the nickname "The Godslayer".

Reksis appears as a target in the activity Target: The Hangman.

Reksis Vahn is an aggressive melee combatant. He prefers to charge into battle directly with his large Flame Cauldron, swinging it around and dishing out high amounts of damage with each strike.

When at farther ranges, he will smash his censer on the ground to create a large, wide line of flames which quickly burn away at a Guardian's shield and health, and if at point-blank range, he will slam his censer on the floor, creating a shockwave knocks Guardians around and deals massive damage if it hits directly.

Vents will also emit flames throughout the arena for area denial. Occasionally, Reksis Vahn will teleport away from the arena and summon lesser Scorn units for reinforcements, but soon afterward, he will reappear and continue his assault. The small circular arena makes ranged combat difficult. Therefore, one should turn to their grenades, Supers, or high-impact weapons as a reliable method of damaging Reksis Vahn safely.

Game Informer: These Are The Eight Barons Who Helped Kill Cayde-6 In Destiny 2: Forsaken

Retrieved from "https://destiny.fandom.com/wiki/Reksis_Vahn?oldid=225002"
Community content is available under CC-BY-SA unless otherwise noted.