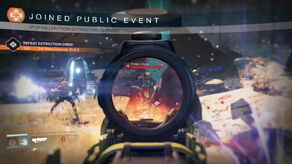 Players must work together to eliminate a groups of Fallen at 3 or 4 different extraction points. Enemy ships will fly to your location and drop off enemies. After each point is cleared, the enemies will progressively get tougher. This means the final point will be the hardest for the Guardians, with most adversaries having a yellow health bar and shields. Players are given 1 minute at each of the extraction points to complete this task.

A Fallen ship flies to your location and drops down a Devil Walker (Earth) or an Iron Walker (Moon) and the players must come together to destroy the vehicle. While battling the Walker, players must also engage with other Fallen troops. Players are given 5 minutes to complete this task.

A satellite system falls from the sky and hits the surface of your location. The machine must be protected until the scanning procedure reaches one hundred percent. In order for the percentage to increase, Guardians must stand within a ring that encircles the satellite. Ships will fly to the crash site and release enemy ground forces to try and stop the Guardians. Players are given 4 minutes to complete this task.

An enemy target spawns within the vicinity and must be killed by the players before he passes through a certain amount of checkpoints. The checkpoints may differ depending on the enemy, as well as the location. Some can range from 4 checkpoints, while others can go up to around 12 checkpoints. Targets are traditional enemies but have an increased amount of health, making it difficult for players who play solo. Players are given 5 minutes to complete this task.

Players must gather around a Vex conflux and keep them away from it. Players must stand inside a ring and stop enemies from reaching the inside. No more than ten Vex can step inside of the ring, otherwise the objective is a failure. As the timer comes close to an end, the enemies will get increasingly tougher. Players are given 4 minutes to complete this task.

Retrieved from "https://destiny.fandom.com/wiki/Public_Event?oldid=26176"
Community content is available under CC-BY-SA unless otherwise noted.