watch 04:21
Wiki Targeted (Games)
Do you like this video?
Play Sound

No
Pirrha, the Rifleman was a Scorn Baron that appears in Forsaken. This all-seeing sniper specialized in long-range combat. He wore the pelt of a Cabal War Beast along with its mask. He was imprisoned in the Prison of Elders alongside the other Scorn Barons before being set free by Uldren Sov. He was a Raider-class enemy.[1]

Pirrha was a deadly shot and is responsible for the deaths of several notable fighters, such as Awoken Paladins Tellos Cir, Loris Pol, and Hollis Eso at Pallas Falls. He had a penchant for destroying Ghosts to truly end the lives of any warriors capable of resurrection; one such casualty was the Ghost of Cayde-6, Sundance. He used a bullet from a weapon of sorrow that was meant to be used to kill Cayde but instead killed his Ghost. How he came into possession of one is unknown. [citation needed]

Pirrha is the target of the activity Target: The Rifleman. He can be found in the Hellrise Canyon, where he has set up his camp. He lures travelers into an impenetrable security network before eliminating them from a distance.[2]

Pirrha's main weapon of choice is a Scorn crossbow, which fires charged Void arrows from long range that can easily hit their mark; their high damage can crack a Guardian's shield in an instant.

When faced at closer ranges, he will teleport or smoke dash to evade and flank the player, and if cornered, he will stomp the ground to knock them back.[3]

His most devastating ability, however, is the use of decoys. The decoys can easily distract unprepared Guardians and overwhelm them with constant crossbow fire, although they are easily destroyed. If the decoys prove bothersome, one can deactivate them with a low-damage weapon and then focus their firepower on Pirrha himself. 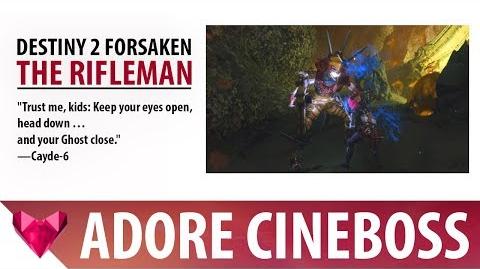 Retrieved from "https://destiny.fandom.com/wiki/Pirrha?oldid=226700"
Community content is available under CC-BY-SA unless otherwise noted.