The Anomaly
First Light
The Cauldron

Destiny
An ancient evil stirs beneath the shattered surface of our moon.
― In-game description

The Moon is the celestial body that orbits Earth.[1]

Like many other planets and moons during Destiny, the ruins of humanity's Golden Age as well as alien structures inhabited by enemy species can be found on the surface.[1] The Moon is classified by The City as a "Forbidden Zone," as early exploration attempts had proven too dangerous.[2]

Early after the collapse of the Golden Age, the Hive invaded and took hold of great portions of the Moon. After the establishment of The City and the Vanguard, humanity made a disastrous attempt to retake their former colony. The Hive, led by Crota, inflicted tremendous losses on the Guardians present, resulting in the Vanguard's abandonment of the offensive. Any expedition to the Moon was no longer sanctioned by the Vanguard, and for centuries the Hive were left to their own devices, tunneling deep beneath the lunar surface and constructing an enormous network of catacombs.

The Hive's deployment of seeders on Earth, launched from the Moon, has forced the Vanguard to rescind their decision to principally avoid Lunar territory. Fearing further incursion, the Vanguard have begun sanctioning strikes against key Hive personnel and assets. 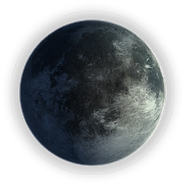 The Moon as it appears in the Director.

Concept art of the Moon's surface.

Concept art of the Moon's surface.

Concept art of the accelerator.