Deceased
Kaniks, the Mad Bomber was a Scorn Baron that appeared in Forsaken.  Kaniks was a crazed demolitions expert and often loses himself in the adrenaline of explosive combat. He was imprisoned in the Prison of Elders alongside the other Scorn Barons before being set free by Uldren Sov.[1]

Prior to the events of the Red War, Kaniks was responsible for planting the vast minefield located in pockets of The Reef that have claimed several Awoken lives.[2] He was killed by the player in the mission Target: The Mad Bomber.

Kaniks is the target of the Activity Target: The Mad Bomber. He utilizes Void Grenades in combat.

Kaniks' main explosive weapon of choice is the Scorn Grenade, which he throws at The Guardian to continuously bombard their position, breaking their shields in just a handful of explosions, and not taking much longer to outright kill them afterward.

He also moves rapidly and teleports to random locations as well, making him an erratic target.

Occasionally, he will disappear from the area and transmat a Splinter Mine, which will immediately kill all Guardians in the vicinity if it is not defused. When defusing the mines, lesser Scorn units such as Screebs and Ravagers will assault the player on all sides and must be taken care of. While fighting Kaniks, it is best to keep one's distance and remain mobile, as to avoid the detonations as well as the Ultra Smash at close range.[3] 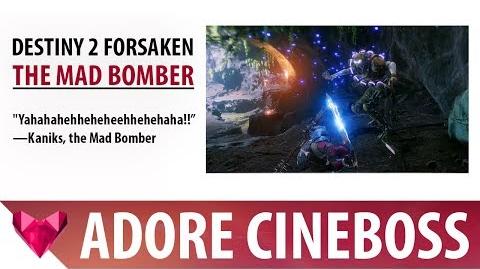 Destiny 2 Forsaken Baron Kaniks, the Mad Bomber
Add a photo to this gallery

Retrieved from "https://destiny.fandom.com/wiki/Kaniks?oldid=223236"
Community content is available under CC-BY-SA unless otherwise noted.