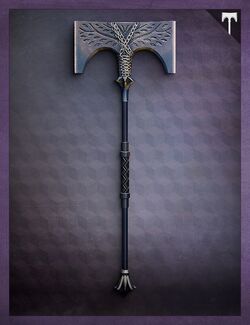 The Iron Battle Axe is a weapon most notably wielded by the Iron Lords, and can also be picked up and used by Guardians.

It is found in rooms requiring Splicer Keys, in certain encounters in the Archon's Forge where the Devil Splicers deem Guardians worthy, and in the story mission The Iron Tomb when the players are required to kill the Remnants of Felwinter, Gheleon and Jolder.

A main difference between the Iron Battle Axe and other melee weapons is that its "ammunition" depletes over time if not used; one "round" is depleted every 1-1.5 seconds if not used. "Ammunition" for the Axe is restored by going near lit braziers, which help rekindle the axe until the brazier burns out; 2 "rounds" of "ammunition" can also be restored by killing an enemy with the weak melee attack. As the axe is being rekindled, its head starts to become more and more fiery; the entire head of the axe is engulfed in flames when it is fully rekindled. When the axe runs out of "ammunition", it will disappear from the user's hands; this does not happen in the story mission The Iron Tomb, where the Axe is required to kill the Remnants of Felwinter, Gheleon, and Jolder.

Retrieved from "https://destiny.fandom.com/wiki/Iron_Battle_Axe?oldid=159766"
Community content is available under CC-BY-SA unless otherwise noted.