This article is a stub. You can help Destiny Wiki by expanding it.
Respected among all others, Ikora Rey tutors new Warlocks with a lifetime of hard-earned knowledge.
― In-game description[2]

Ikora Rey is the Warlock Vanguard in the Tower.[2] Rey sells a variety of Warlock armor (including Vanguard armor) and emblems. All Guardians can purchase and own these items regardless of their class, but only Warlocks can equip Warlock armor.[2]

Prior to taking on her role as Vanguard, she flew solo reconnaissance missions across the inner solar system and was known for being outspoken. At that time, Invective was her weapon of choice.[3] She is also the only person to have ever beaten Shaxx in a Crucible match.[4]

Ikora Rey in the ending of The Coming War. 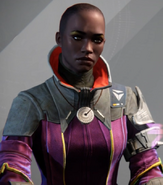 Ikora Rey in the Tower in Destiny. 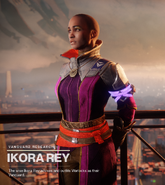 Ikora Rey in the Tower in Destiny 2.

Retrieved from "https://destiny.fandom.com/wiki/Ikora_Rey?oldid=224993"
Community content is available under CC-BY-SA unless otherwise noted.