Zombie-like appearance; arc-based attacks
The Hive are an impossibly ancient race[1] that battled humanity at the end of their Golden Age.[2] They most prominently reside on the Moon, where they have burrowed deep within its lifeless core, carving out a kingdom for themselves. They have been silent and buried among many dark and terrible secrets, staying there for centuries while growing stronger. They serve as a reminder of the tremendous power that brought forth the Collapse.[3]

The Hive is an ancient species that traverse the stars in ships that act like sarcophagi, which have kept them alive by some magical means for millennia.[4] The Hive will delve deep into a planetoid, unheeding of the damage they do in the process, crafting linked caverns and gothic-inspired columns. Their underground spaces are like a dungeon that has only recently been pulled up from too long underwater.[1] They have existed for billions of years in service to the Worm Gods who gave them their abilities directly from the Formless One. In return for their service, the Worm Gods helped them escape the incoming Syzygy that was going to destroy their homeworld of Fundament. They follow a religion called the Sword Logic, which is an extreme form of Darwinism where only the strongest survive.

The Hive intend to evoke a feeling of "undead royalty,"[5] and are a vaguely humanoid species with "dry, flaking skin encrusted with ancient armor."[5] At least some of the Hive appear to have supernatural abilities, including the ability to hover or float and manipulate energy and electricity.[6][7]

The Hive is present on the Moon and constructed a massive underground fortress known as the Hellmouth.[8][9] They can also be found in places in Old Russia on Earth, such as at the Skywatch, where they occasionally fight with the Fallen who also reside there. In Destiny 2, the Hive can be found on Titan, Mars, the Tangled Shore, and the Dreaming City, as well as simulated versions of the Hive on Mercury in the Infinite Forest. A new variant of Hive known as "Nightmare Hive" can be found on a new Hive fortress in the Moon during Shadowkeep.

The Hive is categorized into several classes.

Thralls are a basic class of Hive. They are white in color and prefer melee attacks using their long fingers tipped with sharp claws and rush up close.[10][11] They wear no armor other than ancient plates that appear to be encrusted into their bodies. They have no visible eyes and, in some places, their skin has rotted away to expose their bones.[11]

Acolytes are Hive foot soldiers and do the bulk of the combat.[12][13][14][15] Formerly known as "Troopers," Acolytes appear to wear helmets with optical qualities and seem to lack the long fingers and sharp claws of their Thrall brethren, enabling them to wield Arc - or Void -based weapons.[12][15]

Knights are large, armored Hive that wield enormous Cleavers or Hive Boomers that launch meteor-like attacks.[10][16] They can be deadly in large numbers or when accompanied by a Wizard. With the Epic modifier active, Knights posses an Arc shield.

Wizards are regal, flying enemies that use ranged attacks.[10][17][18] This class has elaborate ancient armor, wears a long, crumbling cloak, and appears to float in midair, using dark magic attacks against Guardians. Wizards possess a Solar shield of average strength, depending on the level. If their shield integrity goes too low, they may "hide" or flee until they can recharge.

Ogres are massive Hive that use powerful melee attacks and rapid burst energy blasts to obliterate their enemies.[10][19] Ogres are a sick and twisted relative of the Thrall.

Shriekers closely resemble a Fallen Servitor with large armor plates protruding from it. The center is more of a Void "eye." It fires large barrages of homing Void missiles. The name "Hive Shrieker" appeared briefly in a Destiny commercial.[20]

A subvariant of the Acolyte that serves as a dedicated Hive sniper. Their appearance is similar to a normal Acolyte, but are noticeably affected by the frozen surroundings of Mars. Adherents typically have large spikes of ice protruding from their back. They are mainly found in the Warmind DLC.

Currently, nine sects exist within the Hive army. These include:

The Blood of Oryx is a sect located on the Earth and Moon, and are believed to be the direct servants of Oryx himself. Their signature color is purple.

The Spawn of Crota is a sect located on the Moon, and are the heralds of a dark future, led by a long-forgotten king. Crota and his legions seek to confiscate and control the Moon. Their signature color is yellow.

The Hidden Swarm is a sect located on the Moon, and are designated as the Hive's outermost line of defense. Their main defense points are the various temples and shrines scattered across the vast Hive fortress. Their signature color is red.

The Scarlet Brood is a sect revealed in the official strategy guide.[21]

The Venom of Oryx is a sect revealed in the official strategy guide.[21]

The Silent Brood appear in The Founts on the Dreadnaught, and also in The Sunless Cell strike. Their signature color is light blue. They are the wardens of the dungeons. They guard those who rose in rebellion against the Taken King, most notably Alak-Hul, The Darkblade of the Hive, the adopted son of Oryx.

The Lucent Brood are a sect of the Hive led by the Witch-Queen, Savathun. They first appear in Destiny 2, appearing only in Titan during the Red War as normal Hive, but with Taken which are a part of this sect appearing on Io as well. However, this sect of Hive returned in Forsaken as the main antagonist for the endgame, appearing in both the Tangled Shore, as well as the Dreaming City. While only normal Hive enemies appear on the Tangled Shore, both normal Hive and Taken appear in the Dreaming City. These Hive also appear in Savathun's Throne World, in the new dlc "The Witch Queen".

It is assumed that this sect of Hive was also simulated on Mercury within the Infinite Forest, as the Hive simulations residing there share the same symbol that Savathun's Hive use.

The Grasp of Nokris appears on Mars in the Warmind expansion pack for Destiny 2. They are led by the titular Nokris, as well as by the Worm God Xol. They are notable for their icy appearance, due to being trapped underneath Mars' surface for hundreds of years. After the death of both Xol and Nokris left a power-gap within the Grasp of Nokris, the remaining Hive attempted to summon Savathun, so she could take command of their sect of Hive.

In battle, the Hive makes use of ancient metallic armor, optical enhancements, and Arc-, plasma-, or Void-based weapons.[6] Some Hive also use large, glowing, arc-based Cleavers in battle.[16] 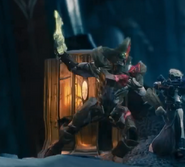