Hiraks, the Mindbender was a Scorn Baron that appears in Destiny 2: Forsaken. Hiraks is an Ascended Eliksni

Deceased
who reigns over the Ascendant Plane. As such, has the ability to summon Hive combatants to fight alongside him. He wields a powerful Boomer in battle.[1] He was imprisoned in the Prison of Elders alongside the other Scorn Barons before being set free by Uldren Sov.

Before ascending to his current form, Hiraks was a Dreg that fell deep into the Hellmouth on the Moon. After witnessing closely the Hive civilization, he reemerged obsessed with the race and spoke incomprehensibly. He began to study the race closely and discovered a method of forming his own throne realm located within the Ascendant realm. His skills grew in the ability to unravel the minds of his enemies, and by channeling the powers and knowledge of the Hive he gained the ability to lead them.

Hiraks was the mastermind of the Great Crow Heist. During the event, Hiraks trapped and converted Prince Uldren's Crows to sow mistrust between the Reef and Earth. He also had a hand in experiments on Asteroid 128 Nemesis, where his actions resulted in an asteroid shifting between the normal dimension and the Ascendant realm.

Hiraks appears in the adventure Target: The Mindbender. The mission takes place on the Tangled Shore within the The Reef.[2]

Hiraks mainly fights The Guardian with his Scorn Boomer, which has a faster cyclic rate and greater range than a typical Hive Boomer. The explosive Arc bolts discharged from the weapon can quickly blast through a Guardian's shield and health. He will stomp the ground at close range, knocking players back a significant distance and dealing massive damage to them in an instant.[3]

In addition, he is backed by Hive units instead of Scorn, and will use Void Ether-Shields to completely negate all damage dealt. as well as his reinforcements. Occasionally, he will run through a Hive portal and appear on the other side to both summon more Hive backup and flank the player. The main weakness of Hiraks is his slow movement, making it possible to outmaneuver him in combat. 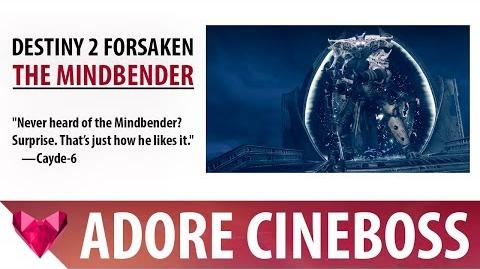 Retrieved from "https://destiny.fandom.com/wiki/Hiraks?oldid=223211"
Community content is available under CC-BY-SA unless otherwise noted.