Dominus Ghaul of the Cabal Empire

Dominus Ghaul was an albino Cabal warlord and the leader of the Red Legion.[2] He is the main antagonist of the Red War campaign in Destiny 2.[2]

At some point, Ghaul, with advice from the Consul, launched a successful coup against the Cabal emperor, Calus, usurping his throne and exiling him.[3]

Later, Ghaul attacked and took over the Last City in an attempt to prove his legion's worthiness to The Traveler.[2]

The Consul explained to him that an operation on the Jovian moon was a success. Ghaul had second thoughts and began seeking a new way to gain the Light. As the Consul explained that there was a problem in the City caused by the Guardian, he and Ghaul argued with each other. Ghaul talked to the Speaker about what more he needed to do to be graced. The Speaker told him that the Traveler never spoke to him. Feeling pity, he pondered on what he needed to do and began to rethink how he was going about getting the Traveler's blessing. Almost immediately, the Consul, tired of Ghaul wasting time on trying to be graced, executed the Speaker. As Ghaul backed away from the Speaker's dead body, he started to rethink the entire plan. After the Consul explained that he chose him to be graced and not "some inert machine," Ghaul felt he no longer needed assistance and killed the Consul via asphyxiation, deciding that taking the Light by force was the only way to continue.

In his attempt to forcibly take Light from the Traveler, Ghaul was killed by the Guardian. While still infused with Light, Ghaul resurrected himself into a cloud of Light, expecting to finally win the Traveler's favor. Instead, the Traveler awoke, broke from its bonds, and released a pulse that destroyed Ghaul.[4]

Two years after the Red War, Ghaul was revived by a power of Darkness on the Moon as a Nightmare. 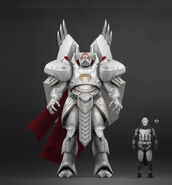