Bright with a few medium-light caves and tunnels

First Light is a Crucible map located in the Mare Cognitum region of the Moon.[1] First Light is a sloped map (one team starts at a higher elevation), is medium-large in size, and includes light vehicle combat, use of Sparrows to quickly get from place to place, and large area control.[1]

Occupying the high ground does not necessarily confer an advantage, as numerous access points allow players to flank or rear attack. Occupying the large structure in the middle of the map allows players to access most other areas of the map and return to safety swiftly.

Three stationary turrets placed around the map provide heavy firepower for quickly destroying vehicles or groups of enemy players, but are not accurate at a distance and contain little in the way of defense. A well-placed sniper rifle shot or a sneak attack from behind can quickly end a turret streak.

The Interceptor is slow-moving but easily outguns other vehicles and players on the map. Counter the Interceptor by attacking it from a turret, with heavy weapons, or shooting the driver when the vehicle is facing away from you. The Pike provides less firepower but more speed, and can be countered in a similar manner. 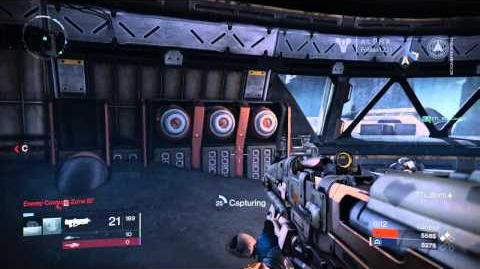 Retrieved from "https://destiny.fandom.com/wiki/First_Light?oldid=215570"
Community content is available under CC-BY-SA unless otherwise noted.