Come, dead thing, and die for the last time!
― Fikrul

Fikrul, the Fanatic is the Archon of the Scorn, a rebel Fallen faction introduced in Destiny 2: Forsaken, and the leader of its Barons. He calls Uldren Sov father, likely believing him to be the source of his power. Due to his resurrection ability, Fikrul can seemingly never truly be killed, and has retorted that he will continue to return to seek vengeance upon the Guardian.[1]

Once a well-regarded Archon Priest of Kaliks Prime, he was rejected and cast out after speaking out against The Great Machine. Joining the outcast Barons, he preached the idea that the Eliksni must be wiped out so that they may rise stronger.

He and the other seven Scorn barons were eventually captured. Fikrul managed to escape, but was gravely wounded in the process. Uldren Sov found him, and indirectly wished to Riven, an Ahamkara, to save him. Riven healed Fikrul, giving him the power to resurrect dead Fallen into Scorn. He then went with Uldren to take over the Fallen House of Kings, which they succeeded in doing. They then parted ways, but they were both eventually captured and imprisoned in the Prison of Elders. Uldren persuaded Variks, the Loyal to release himself and the Scorned Barons out from the prison, and they proceeded to run rampant on the Tangled Shore, until they were stopped by the Guardian.

Fikrul appears as a target in the story mission Nothing Left to Say, as well as in the Hollowed Lair Strike.

Fikrul engages the player with his signature lightning staff, which fires charged Arc projectiles that can drain a Guardian's shield in just a few hits, similar to a Wire Rifle. He will also use his staff to summon large electric circles known as Wrath of the Scorned, which can summon lesser Scorn units; these circles take up a large space and can deal heavy shock damage over time to anyone that stands within them.[2]

Occasionally, whenever his health reaches a certain threshold, Fikrul will surround himself with Void energy to render himself immune to all damage shortly before teleporting the player into the air, surrounding himself with a random elemental shield, and tethering them to his staff, dragging them towards him so he can smash the ground to break their shields and knock them back. To keep up his attack, he will teleport towards the player and overwhelm them with high-impact electric staff projectiles.

Fikrul's powerful attacks and tether ability make him quite possibly the most dangerous Scorn Baron to engage, for the only safe way to engage him is keeping as much distance between him and oneself as possible. 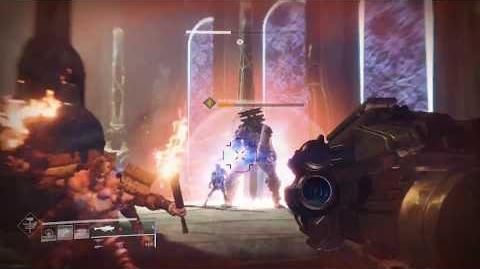 Retrieved from "https://destiny.fandom.com/wiki/Fikrul?oldid=226782"
Community content is available under CC-BY-SA unless otherwise noted.