Destiny Wiki
Register
Don't have an account?
Sign In
Advertisement
in: Article stubs, Destiny Timed Events, Festival of the Lost

Festival of the Lost

Edit
watch 01:30
'Destiny: Festival of the Lost' Trailer
Do you like this video?
Play Sound

This article is a stub. You can help Destiny Wiki by expanding it.
Festival of the Lost is a recurring event in the Destiny games that take place during the month of Halloween. While the event is available, Guardians can participate in various Halloween-themed activities to obtain masks and special consumables.

Festival of the Lost 2015 ran from October 26 to November 9. It introduced masks, pieces of armor that were equipped in the Helmet slot and had 0 Light. There were two types of masks: rare-quality, which became unusable after the event, and legendary-quality, which persisted after the event.

At the start of the event, Eva Levante gave Guardians an Empty Candy Satchel, which could be filled with candy by killing enemies in PvE or Crucible activities. When the satchel was full, Guardians could bring it back to Eva to obtain a Gifts of the Lost mystery bag, which would give a random rare mask and random Halloween-themed consumables. Legendary masks and the same consumables were given by Legacy of the Lost mystery bags, which could be obtained from quests or purchased from Eververse Trading Company. Rare masks could be upgraded to legendary using a Paper Glue consumable, which could be found in mystery bags or by dismantling other legendary masks.

Festival of the Lost 2016 occurred from October 25 to November 8. Unlike the 2015 event, all masks were legendary and persisting, and Paper Glue was neither given nor needed. Some masks could be obtained by trading a full candy satchel to Eva Levante, others could be earned by completing quests, and the rest could only be obtained from Treasures of the Lost mystery bags.

All Crucible matches for the duration of the Festival took place at night. In Trials of Osiris matches, the radar was disabled and fallen Guardians could not be revived.

In addition to the three legendary emotes from 2015 (Boo, Monster Dance, and Zombie Dance), Eververse Trading Company offered the Howl and Terrify emotes.

Festival of the Lost returns in Destiny 2: Forsaken from October 16th, 2018 to November 6th, 2018. After the tragedies of the Red War and the death of Cayde-6, Amanda Holliday spearheads the festival and is the primary vendor. By talking to her, she gives the Guardian a Rahool mask and tells them to investigate strange readings on Lost Sectors in Io. The readings eventually lead the Guardian to the Haunted Forest to dispel a Nightmare that has gathered there.

The Plaza in the Tower is decorated with Engram lights, candles, paper lanterns, and sparkling ar effects. Guardians receive an Ephemeral Engram after leveling up which grants unique cosmetic items from Eververse. Guardians can also purchase Ephemeral Engrams with Silver and may purchase various items individually each week with Bright Dust. 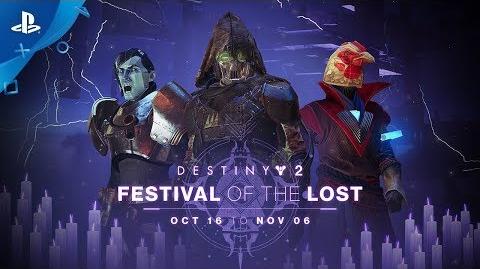