Four eyes and up to four prehensile arms
The Fallen are a scourge, tirelessly engaged in war against us and scavenging all that remains.[1]

The Fallen, or Eliksni in their native language,[2] are a nomadic race of four-armed bipedal humanoids. They are a species of pirates and mercenaries located on Earth, the Moon, Venus, and The Reef (later on Mars), and are one of the primary antagonist races in the Destiny series.[3][4]

The Fallen are an agile race with four arms and two legs, giving them the ability to scale walls with ease.[5] The race expresses a complex understanding of technology as they possess advanced armor, weapons, vehicles, and space-faring capabilities.[6] They also seem to have the capability to speak Earth languages to varying degrees. Variks, a member of the House of Judgment, is one of the few to speak them fluently. The Fallen have four eyes that glow a bright white-blue when they are alive, but once killed, the light dies out. In their mouths are two rows of sharp, knife-like teeth, indicating that the Fallen are carnivorous in nature.

Fallen cannot survive without Ether, which is distributed to them by their Servitors.[7] Their armor contains a supply of Ether and serves as a life support system, similar to a spacesuit.[8] When killed with precision damage, the Fallen's Ether will be released from their armor.

The Fallen have little to no knowledge of their history before an event they call "the Whirlwind."[8] After the Whirlwind, the Fallen began a new, nomadic way of life, living in their massive Ketches and plundering desolate ruins.[9] Eventually, they spread throughout the Solar System, claiming areas of Earth, the Moon, and Venus.

While the Fallen often settle in abandoned facilities on various worlds such as Earth, the Moon, and Europa, they are nomadic and therefore have no permanent strongholds in these regions, but instead call their starships home. According to the Fallen themselves, they have claimed every planet and moon that humanity once held.[citation needed]

In combat, Fallen warriors operate in packs led by Captains and sometimes employ small drones called Shanks and/or large beetle-like tanks known as Walkers. Fallen Houses are led by Kells, the masters of the massive Ketches.

Shanks are airborne drones that possess minimal intelligence, and attack in large numbers. They serve as cannon fodder. Shanks receive a bigger defense upgrade with the epic modifier active as they gain a solar shield.

Dregs are the lowest ranking Fallen in the chain of command. They are thieves driven by desperation and rage. They are crafty, but tend to forfeit their position with their clattering and hissing. Dregs wield shock daggers and pistols, and can be easily distinguished from other Fallen ranks by only having two fully-developed arms as opposed to the usual four.[1] The other arms are docked and prevented from developing until they have proven themselves worthy to become Vandals.

The riflemen of the Fallen invasion force, Vandals are of a higher rank than Dregs, with weapons capable of long-range attacks and deadlier force. The disadvantage of the Vandal's powerful Wire Rifle is their requirement of a longer charge time.[1]

Captains are the fiercest of the Fallen hierarchy, distinguished by their heavy armor and adorned cape. They often wield twin swords in combat, but can also have an assortment of other weapons. Captains have a sense of nobility about them and consider humanity to be an inferior race.[1]

Servitors are floating, spherical Fallen that have powerful attack capabilities, being able to dish out more damage than the rest of the Fallen by launching Void projectiles from an eye-like structure on their frames. The Fallen Archons worship the Servitors, as they are the Fallen's source of Ether.

Archons are high priests of the Fallen, serving as intermediaries between the Servitors and Kells of each individual house. Archons fight much like Captains, except they have a "Smash" ability and have a far higher damage tolerance. One of the most notable Archons is Riksis.

Kells are the leaders of the Fallen Houses, according to the Grimoire. It was they who declared that all of humanity's territories now belong to the Fallen.[citation needed]

The Fallen are organized into distinct houses of nobility, some of which are as hostile to each other as they are to The City, which suggests that there is brutal infighting within the species itself.[11]

The House of Devils is based on Earth, and it is considered "the scourge of The City." They led the battle of the Twilight Gap and the destruction of London, and are currently invading Old Russia in search of an object buried beneath the surface. This house's color is crimson.

The House of Exile is a minor house based on the Moon. They consist mostly of outcast and disgraced Dregs, who are galvanized by pride, hate, or the desire for freedom. They are noted by Variks to not follow an Archon or Kell, and do not have a Prime Servitor. This house's color is green.

The House of Judgment is a house in the Reef. It is one of the oldest houses, and the only known living member is Variks, the Loyal.

The House of Kings is a house on Earth, but are rarely seen by the eyes of Guardians. However, on several occasions, Guardians can find the House of Kings by patrolling the Terrestrial Complex. They are considered the most brutal house of all of the Fallen and hold rivalries with the other houses and The City alike. This house's color is gold.

The House of Rain is an extinct Fallen House known for their prophecies.

The House of Scar is an extinct Fallen House mentioned by Variks.

The House of Stone is an extinct Fallen House who "stood before the Maw" of what is assumed to be The Darkness. Their Kell was Chelchis, Kell of Stone, who is still highly revered by the Fallen.

The House of Winter is a house located on Venus, where the group shows much interest on the ruins of the Academy along the Shattered Coast. They also show some interest in the Vex Citadel. This house's color is teal.

The House of Wolves was once located in The Reef, where they served as Queen Mara Sov's royal guards. Two Vandals would stand on both sides the Queen's throne, guarding her from outsiders while she spoke. However, when Skolas returned, the house brutally rebelled by killing many of the Queen's Awoken royal guards. They then fled to the inner solar system, resulting in the Queen opening The Reef to the Guardians so that they would hunt the house down in exchange for the riches of her realm. After the events of House of Wolves, the survivors attempted to eke out an existence on Mars. This house's color is dark blue.

Following numerous defeats around the system, coupled with dwindling supplies and the arrival of the Red Legion, the Fallen where forced to abandon their ancestral ways, burning their house banners and abandoning their house armors they adopted a new, singular identity: The House of Dusk. Now clothed in purple armor, these survivors of their endless war against their own extinction now march under a single banner. The House of Dusk holds territory on Earth, Titan, and Nessus.

Not every Fallen is a member of a house, and some even go one to form organisations of their own outside the House system.

Concept art of a Fallen Captain.

Concept art of Fallen accompanying a Walker and a Servitor.

A Titan riding a Pike. 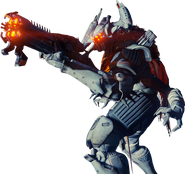 Riksis, Devil Archon.
Add a photo to this gallery

Retrieved from "https://destiny.fandom.com/wiki/Fallen?oldid=221415"
Community content is available under CC-BY-SA unless otherwise noted.