Exos are a species of humanoid machines, both for players and non-player characters, in Destiny and Destiny 2.

Exos began as self-aware war machines developed by humanity on the moon Europa during the Golden Age[2] for a long forgotten war,[1] with the sole purpose of protecting their creators.[3] They were rebooted during the Collapse and now have no memory of their original function.[4] Exos are "so advanced that nothing short of a Ghost can understand their inner functions. They remain ciphers, even to themselves; their origins and purpose lost to time. Whoever built the Exos fashioned them in humanity's image, gifting them with diversity of mind and body. Many of the City's Exo citizens live and work alongside their organic brethren, while others fight again, reforged in the Light of the Traveler to serve as Guardians.[1] 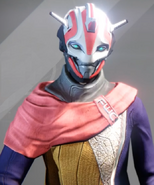 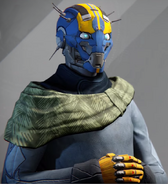