Elykris, the Machinist is a Scorn Baron introduced in Destiny 2: Forsaken. Elykris is the second in command of the Scorn Barons. She is well versed in explosive ordinances and weapon crafting. She was imprisoned in the Prison of Elders alongside the other Scorn Barons before being set free.[1]

Elykris is notorious for her previous raids on ships and settlements in the Mars region. She took part in the siege of Arran along with the heists after the Solis Descent.[2] She was imprisoned in the Prison of Elders alongside the other Scorned Barons, before they were freed. Elykris then proceded to run rampant across the Tangled Shore, before she was killed by The Guardian, only later to be revived for the heroic ether harvest public event, suggesting that she still remains an active threat alongside the Fanatic

Elykris appears in Target: The Machinist.

Elykris possesses multiple weapons in her arsenal, all of which have devastating consequences. In hand, she wields a Scorn Cannon, which fires explosive Ether fumes from long range, constantly blasting the player down and pounding away at their shield.[3]

She will also occasionally crouch and use her back-mounted munitions device to fire Scorn Rockets one after another, each of which deals high blast damage; every time her health reaches a certain threshold, she will duck down on the ground, surround herself with Void energy to negate all incoming damage akin to an Ether-Shield, and rapidly fire Solar orbital strikes from her munitions device before teleporting to another location shortly afterwards to directly continue her assault.

This means the player has to contend with both direct combat and evasion simultaneously. Additionally, there are poisonous liquid pools littered throughout the arena, which can prove to be a deadly environmental hazard. The arena itself, however, is fairly large, and thus it is easy to space oneself from Elykris in order to safely and reliably damage her. Her movement is rather slow, so the player can continue to stay at an extended range for an easier engagement. 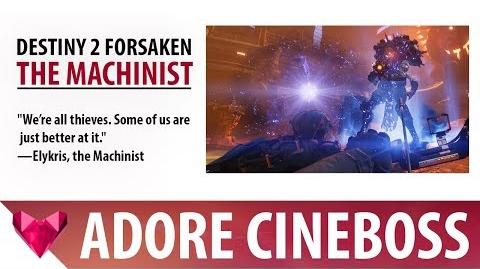 Retrieved from "https://destiny.fandom.com/wiki/Elykris?oldid=226768"
Community content is available under CC-BY-SA unless otherwise noted.