Edit
watch 02:59
Wiki Targeted (Games)
Do you like this video?
Play Sound

"Your Traveler terraformed your planets. But the Awoken terraformed the Dreaming City. It is our creation. It is a reflection of our people - not a false gift from a skittish god."
— Shuro Chi, Pilgrimage: Garden of Esila, View

The Dreaming City is a location featured in Destiny 2: Forsaken. The area serves as a major endgame destination and features a raid in the city's core. It is located within The Reef and is accessible after completing the Forsaken campaign.

One of several secret cities constructed by the Awoken around the Reef, the Dreaming City was their most prized accomplishment, made to emulate and preserve the society brought with the Awoken from the Distributary. The Dreaming City was evacuated prior to the invasion of Oryx. When Oryx killed the Awoken Queen, he became aware of the city and dispatched his Taken there. As of Forsaken, these Taken served the Taken Ahamkara, Riven.

Currently, the City is trapped under a curse laid down by Riven, who acted upon the final, unspoken wish of her killers. The Dreaming City is trapped in a three-week cycle, where Taken corruption spreads unabated. Guardians must destroy the source of this corruption, but this merely resets the city to the beginning, along with the Awoken trapped there.

The Dreaming City is the Reefborn Awoken's most significant stronghold. It was created by Mara Sov after her departure from the Distributary as her personal realm. At one point, Prince Uldren Sov brought Mara a baby Ahamkara named Riven; whose assistance was proven essential in the City's construction with its wish-magic. The Dreaming City was built by Mara Sov and Techneun Illyn, the Coven Mother; this artificial world was nothing but bare rocks when they started.

The Dreaming City is built upon a flat disk, constructed from the remains of at least one unknown rocky celestial body. Its upper surface contains a "silver sea", water from which continually spills off the edge of the disk and is reclaimed by a stabilization ring that also holds the City in place. The entire city is a closed ecosystem, with water being recycled by hydro capture systems within the bedrock.

A massive ring-shaped structure can be seen in the sky of the Dreaming City, along with what appears to be a black hole directly overhead. The ring is a portal that controls access to the Dreaming City from the Tangled Shore, and utilizes some form of cloaking technology to seal the Dreaming City off from the outside world.

The City is named after a group of unknown entities known as the Dreaming, who are connected in some way with the will of the Awoken people as a whole.

After The Queen and her followers left the Awoken homeland, the Distributary, she created the Dreaming City as her own personal realm. There, she and other Awoken could reside in peace. Uldren Sov desired to bring the Queen a gift and returned with an Ahamkara named Riven, who would stay in the City for the rest of her life.

While Riven was instrumental in the creation of the Dreaming City, she was not the only Ahamkara who visited the Dreaming City. Another wish-dragon, Azirim, was barred from entering the City but still visited the second solstice festival, massacred many Awoken by beguiling them into leaping from the cliffs. Eao, another male Ahamkara, resided in a chamber known as Eao’s Nest before he learned the secrets of the Awoken and escaped the City, threatening to reveal them to the Warlocks of the Last City. The Awoken, specifically Sjur Eido, hunted and killed him for this betrayal, with his bones becoming various powerful items for the Guardians of Earth.

During the onset of the Taken War, Mara Sov ordered the Dreaming City to be evacuated and locked down on the advent of the God-King Oryx and his Hive armadas, leaving Riven behind as its only prisoner. She and the Techeuns sealed off the Watchtower, barring the only known point of entry into the city, and charged The Spider with protecting the tower while turning a blind eye to his illicit dealings.

During the Battle of Saturn however, the Techeuns attempted to escape the death impulse of the super weapon from Oryx's Dreadnaught via emergency selfgates to the Dreaming City as the Awoken fleet was annihilated, but Mara remained behind as part of her gamble with Eris Morn. Unfortunately, Shuro Chi's efforts to save Mara left her selfgate open long enough for the Taken essence of Oryx's death impulse to seep into the Dreaming City, which resulted in the Techeuns becoming Taken by Oryx and causing the Dreaming City to be overwhelmed with Taken forces, which eventually made its way to Riven joining the Taken King.

Three years following the Taken War, the Dreaming City remained infested by Oryx's leftover Taken unaware from the outside until Uldren Sov was manipulated by Riven into unsealing the City using a shard of the Traveler and the Taken-tainted Darkness within himself, unleashing an agent of hers which promptly devoured Uldren. The Guardian quickly killed the Taken Chimera and fulfilled their vengeance for Cayde-6. The Scorn that accompanied Uldren and the Fanatic remained in the city to exact revenge for their deaths and were met with opposition by the Taken.

Petra Venj, investigating the source of Uldren's corruption, gave the Guardian an Awoken talisman that could grant them both entry into the City. Having returned for the first time to the Dreaming City since the Taken War, Petra surmised Riven as the cause of the Taken and Uldren's corruption after having made contact with Queen Mara Sov at the Oracle Engine. At the Queen's behest, Petra enlisted the support from the Vanguard to have Riven killed, and her heart cleansed of her Taken essence.

Two weeks later, a Guardian Raid team was quickly formed and breached their way into the Keep of Voices located at the heart of the city; In the process they freed the Techeuns Kalli and Shuro Chi from their Taken corruption. While the Taken Riven baited the Guardians into killing her, they inadvertently made a single collective wish, allowing Riven to alter the rules of ascendancy within the Dreaming City according to Toland. In ending the Taken Ahamkara, Riven's wish cursed the city; warping it in-between physical reality and the Ascendant Plane, with Taken energies having saturated and engulfed huge portions of the city. Soon enough, the entire realm was plunged into an unending battle between the Guardians and Awoken Corsairs against the armies of Taken and Hive sent under Savathûn and Xivu Arath with remnants of Scorn in between crossfires.

Meanwhile, Petra would provide tactical support for a Vanguard strike team to free the last Techeun Sedia of her Taken corruption. The Drifter would also temporarily set up his Gambit within the Cathedral of Scars and brought Vex and Cabal to compete in through unknown means, following the events of Beyond Light, the map would become unavailable.

As the curse continued to blight the Dreaming City for three weeks, Petra was able to identify the true source of the city's Taken curse: Dûl Incaru, a daughter of the Witch-Queen and the mastermind behind her mother's scheme to access the Distributary using the Awoken secrets found within the City, commanding the curse from Mara's desecrated throne-world of Eleusinia. With the curse now at its peak, the Techeuns used the Blind Well (which was kept charged with Light by the Guardians) and open a rift into Eleusinia, where the Guardians could confront the Witch and her Darkblade bodyguards.

However, upon the death of Dûl Incaru, the Dreaming City reverted to the state it was in when the curse was first unleashed. The curse then spread in the same manner it had previously, with it being revealed that the curse trapped the Dreaming City within a time loop that resets the events of Riven's death and Dûl Incaru's defeat. Through messages left by an unknown sender, it is revealed that the loop was made possible through the wish Riven granted upon her "death", and modeled upon Vex simulations overseen by the Taken Vex Mind Quria. While the curse looping every three weeks, there is currently no way to permanently rid the city of the curse, despite the efforts of both Rasputin and Osiris. Following every reset, the Guardian made reports to Mara Sov using the Oracle Engine, occasionally visiting her personally within her new throne world.

Season of the Hunt[]

Two years after the Taken Curse first settled on the Dreaming City, Xivu Arath turned her attention back on the city, following the Witch Queen's disappearance. Unburdened by the bond of sibling hood, the Hive God of War had her High Celebrant establish at least three Cryptoliths in the Awoken city, creating powerful Wrathborn from the local Hive including Dul Arath, Retainer of Xivu Arath and Xillox, Oppression of Xivu Arath.

The raid is located in the city's core, known as the Keep of Voices. The area is equal to about the size of Nessus. The faction vendor for the area is Petra Venj.

The Dreaming City is an endgame patrol area that becomes accessible after completing the Forsaken campaign. The location will include new public events, activities, and questlines. An activity called Blind Well is a major feature of the area. Groups of three to six Guardians can pledge offerings to a monument that summons creatures to defeat. By defeating enemies, Guardians will unlock new areas and eventually fight bosses at the end of the activity. 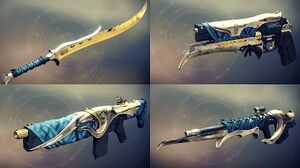