Start a Wiki
watch 02:27
The Loop (Games)
Do you like this video?
Become Legend with the Destiny Ghost Edition
― Tagline

The Destiny Ghost Edition is the premier collector's edition of Destiny which costs $149.99 USD (£149.99 GBP).[1] The set is the second-tier physical limited edition version of Destiny and was released on September 9, 2014 for PlayStation 4, PlayStation 3, Xbox One and Xbox 360.[2] Bungie has stated that the bundle had a "truly ... limited production run and availability,"[1] leading it to sell out quickly and become very rare and expensive on the secondhand market.

This is your Ghost. It sought you out for centuries. It found you, dead and forgotten in the ruins of our civilization’s violent Collapse, and it brought you back to life to protect us all. Defend our home, drive back the forces of the Darkness, find a way to awaken the Traveler, and Become Legend.

As an added incentive to pre-order, players gained early access to the Vanguard Armory which included nine weapons, three helmets and an emblem.[3] According to the Bungie, these items are attainable through gameplay for those that chose not to pre-order.[4]

The Destiny Ghost Edition became a highly sought after product from the moment it was announced and quickly sold out across nearly all available retailers.[5][6] Due to a large quantity of pre-orders, multiple retailers began experiencing supply shortages and as a result, some pre-orders were cancelled; Amazon, Best Buy and Walmart[7] are among some of those retailers.

Shortly after, pre-ordered copies of the Destiny Ghost Edition began selling on auction websites, such as eBay, with bids starting at $300 and exceeding $400.[8] Some completed auctions have gone for $650 and even as high as $1,025 USD.[8]

An unboxed view of the Destiny Ghost Edition.

The contents of the Destiny Ghost Edition.

A top view of the Ghost replica.

A front view of the Ghost replica. 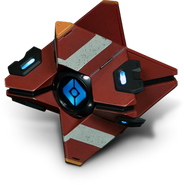 Ghost replica (rendered)
Add a photo to this gallery

Retrieved from "https://destiny.fandom.com/wiki/Destiny_Ghost_Edition?oldid=195568"
Community content is available under CC-BY-SA unless otherwise noted.