Destiny
Destiny 2
The shipwrights of the Tower repair and recommission the ships of the City's Guardians.
― In-game description[2]

Amanda Holliday is the Chief Shipwright of The Tower. She sells Jumpships and Sparrows to players.[2] She also gave quests and bounties during the Sparrow Racing League event.

Amanda Holliday was born to a wandering group of scavengers outside the walls of The Last City. She became a skilled mechanic, working on the group's vehicles as they journeyed towards The City. Her mother carried a shotgun called The Chaperone, which was later redesigned and made available to Guardians.[3]

Amanda was present at the Red Legion's assault on The Last City, and flew a Guardian onto Ghaul's command ship.

Amanda is a hard-working, strong-willed person who appears to get along well with most other residents of The Last City. 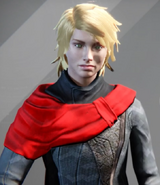 Amanda Holiday prior to Update 2.0.0.

Amanda conversing with Cayde-6 in the Tower Hangar.