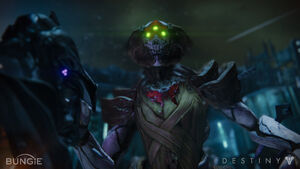 Acolytes are a class of the Hive species. They are basic Hive infantry and lack the long fingers and sharp claws of their Thrall brethren, enabling them to wield Shredders or Boomers.

Acolytes fight in small groups of two or three, often accompanied by a Knight and/or Wizard, and tend to prefer ranged attacks, but they can melee in close quarters if necessary. Acolytes will often take cover when they spot an enemy.

In the King's Fall raid, Acolytes are sometimes accompanied by a major Acolyte called an Adept. Killing an Adept while Acolytes are nearby it will cause the Acolytes to become enraged and shoot Ogre-like beams.

In general, Acolytes are the bread and butter of most Hive forces, serving as medium range support. Although their Shredders aren't very powerful, Acolytes come in decent numbers, and will rain down suppressive fire from all directions before quickly taking cover again. It is advised to kill them when they peek their heads around their cover.

Retrieved from "https://destiny.fandom.com/wiki/Acolyte?oldid=223324"
Community content is available under CC-BY-SA unless otherwise noted.