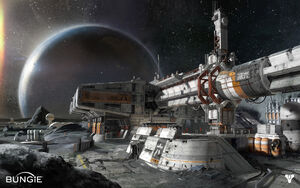 The Accelerator is a location on the Moon that can be visited by players.[1]

Like Moonbase, the Accelerator is an abandoned colonial site from the Golden Age of humanity.[1] According to Bungie Lead Environment Artist Sam Jones, "It is a pale shadow of a once pivotal and very active machine."[1]

The Accelerator is designed primarily to meet the "design/art need to create a large and obvious visual anchor point on the Lunar surface," and can be used "as an easy navigation point from all around the Moon."[1] The Accelerator shares some design elements with Moonbase, and both locations were created out of the same pieces of early concept art.[1]

The Accelerator's numerous meteorite "pockmarks" and its layers of moondust are designed with the theme in mind of nature's slow erasure of man’s foothold on the Moon.[1] Its design also uses bold colors and huge letters to help give it "a sense of vibrancy and identity" and "humanize the location."[1]

Retrieved from "https://destiny.fandom.com/wiki/Accelerator?oldid=200334"
Community content is available under CC-BY-SA unless otherwise noted.